A Lazy Saturday on the Canal 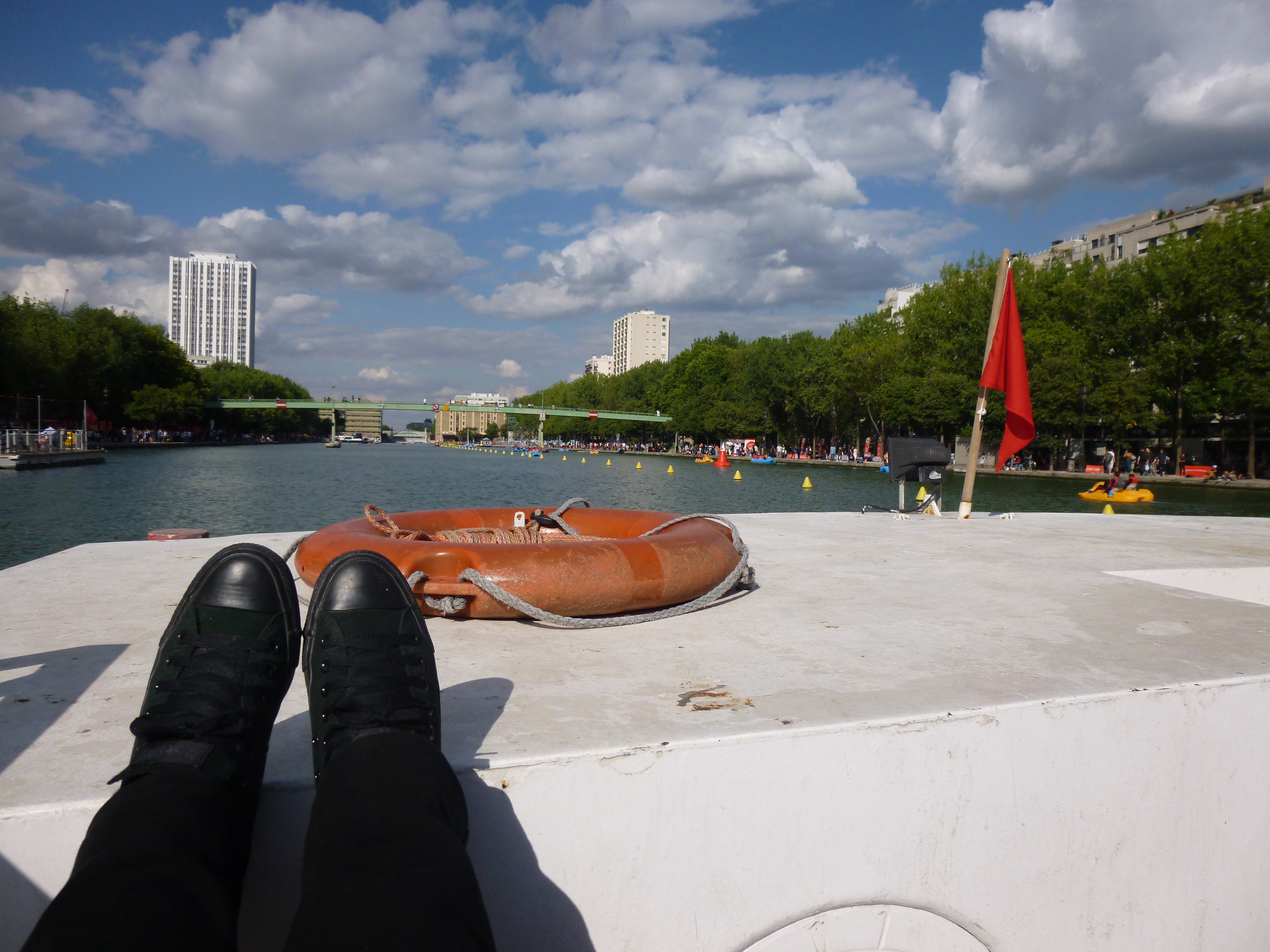 Those eagle-eyed among you will know that I have returned to the UK but I do still have a few blog posts up my sleeve.  In fact, this was the day before we left and I have only just got round to wiring it up – I hope you enjoy it. . .

I mentioned in a recent post that the Canal St Martin was a recent discovery.   Even though, I cycle over this every day I feel that I only know a little bit of it and was keen to discover more.  On Hubby’s last visit, we were sitting on the side of the canal, taking a break during a post-brunch walk with an old friend who mentioned that the boat trip we saw cruising past was actually quite interesting, so we decided to go for it.

There are normally only a couple of departures per day, with an additional early evening sailing on Friday and Saturdays in July and August.  The extra sailing seemed like a great plan, we would take the boat that started in Parc de la Villette at 18:00 (a 2 stop Métro ride or a 20 minute walk from our place) and finish in Bastille, then walk to Le Marais for dinner.

If you choose to, you can travel in the opposite direction, each trip takes approximately 2 and a half hours and costs €18 per person.  These sailings are operated by Canauxrama – cheesy title, I know.

First of all, we headed North along the Canal d’Ourcq up to Porte de la Vilette – on one side was the Cité des Sciences et de l’Industrie where this enormous silver ball was and is the largest science museum in Europe. 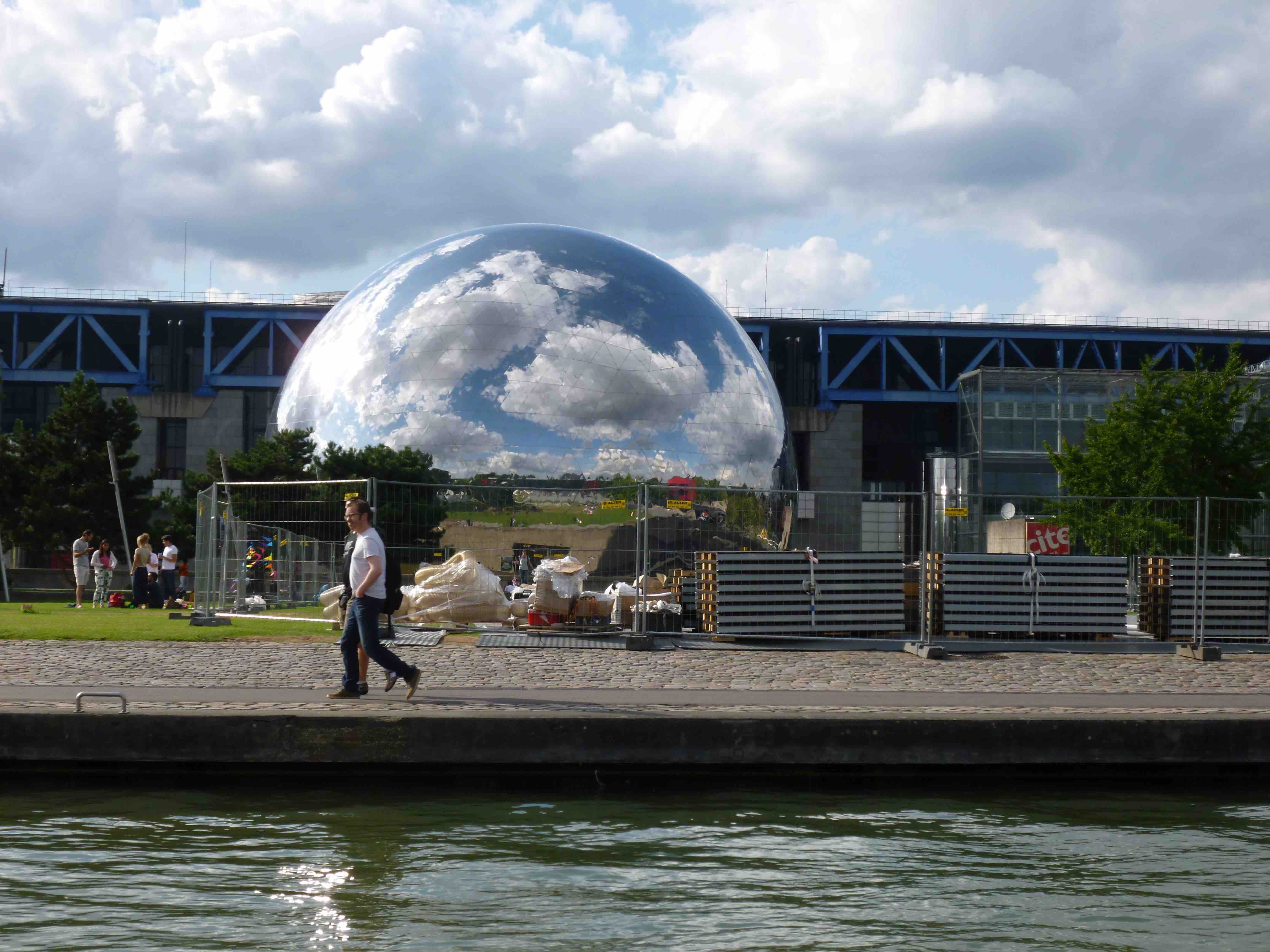 Museum of Science and Industry

On the other side was the Cité de la Musique, a museum of historical musical instruments that is also a concert hall and home of the Conservatoire de Paris (a college of music and dance).

A 180 turn and we headed back to the start point, passing by part of the Paris Plages where people were out in force enjoying the water sports on offer.  I was particularly jealous of the large inflatable tubes that you usually find rolling around in a field as well as the bike pedaloes, perhaps most fun off all was the zip wire from one side of the Bassin to the other! 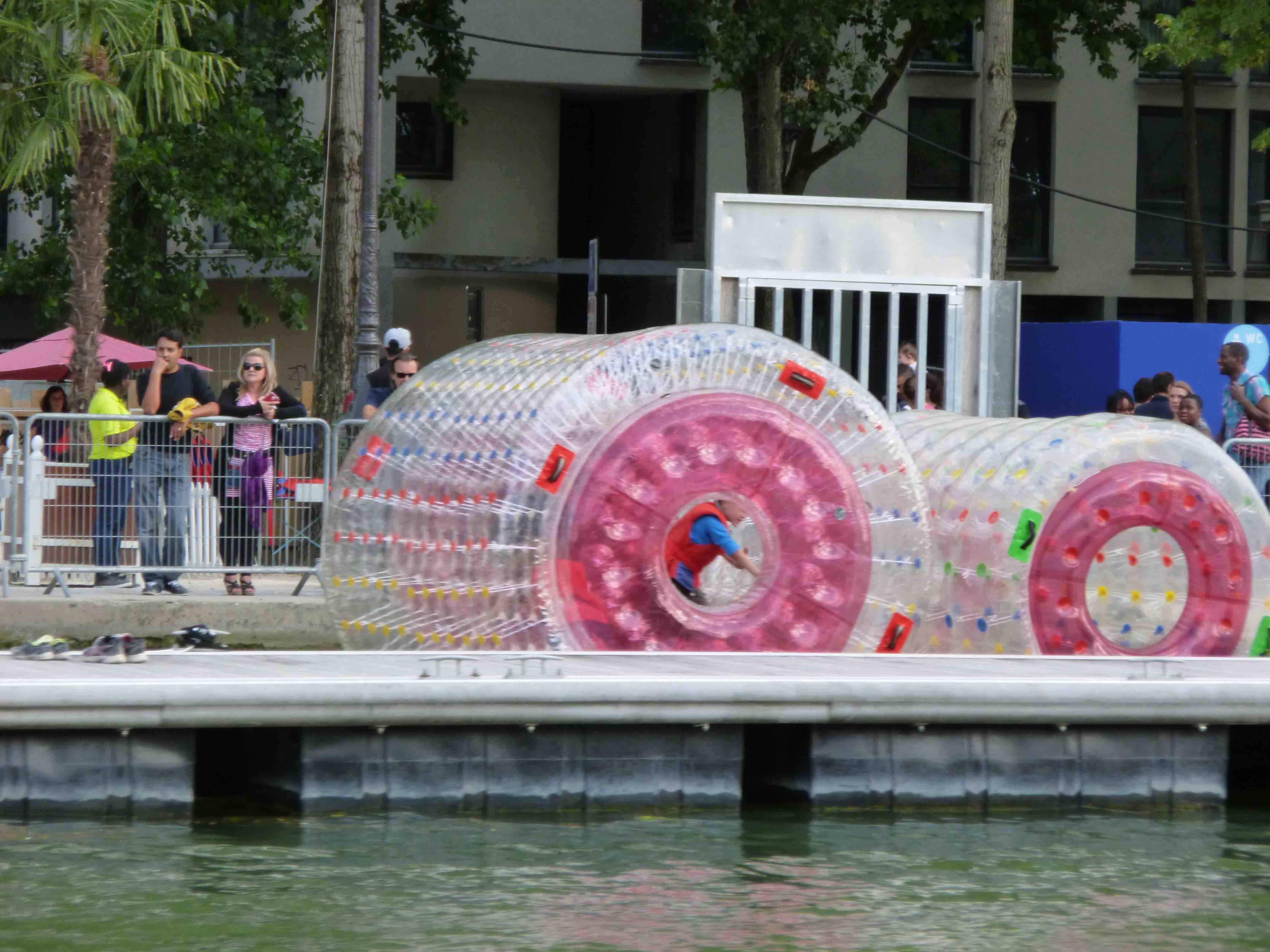 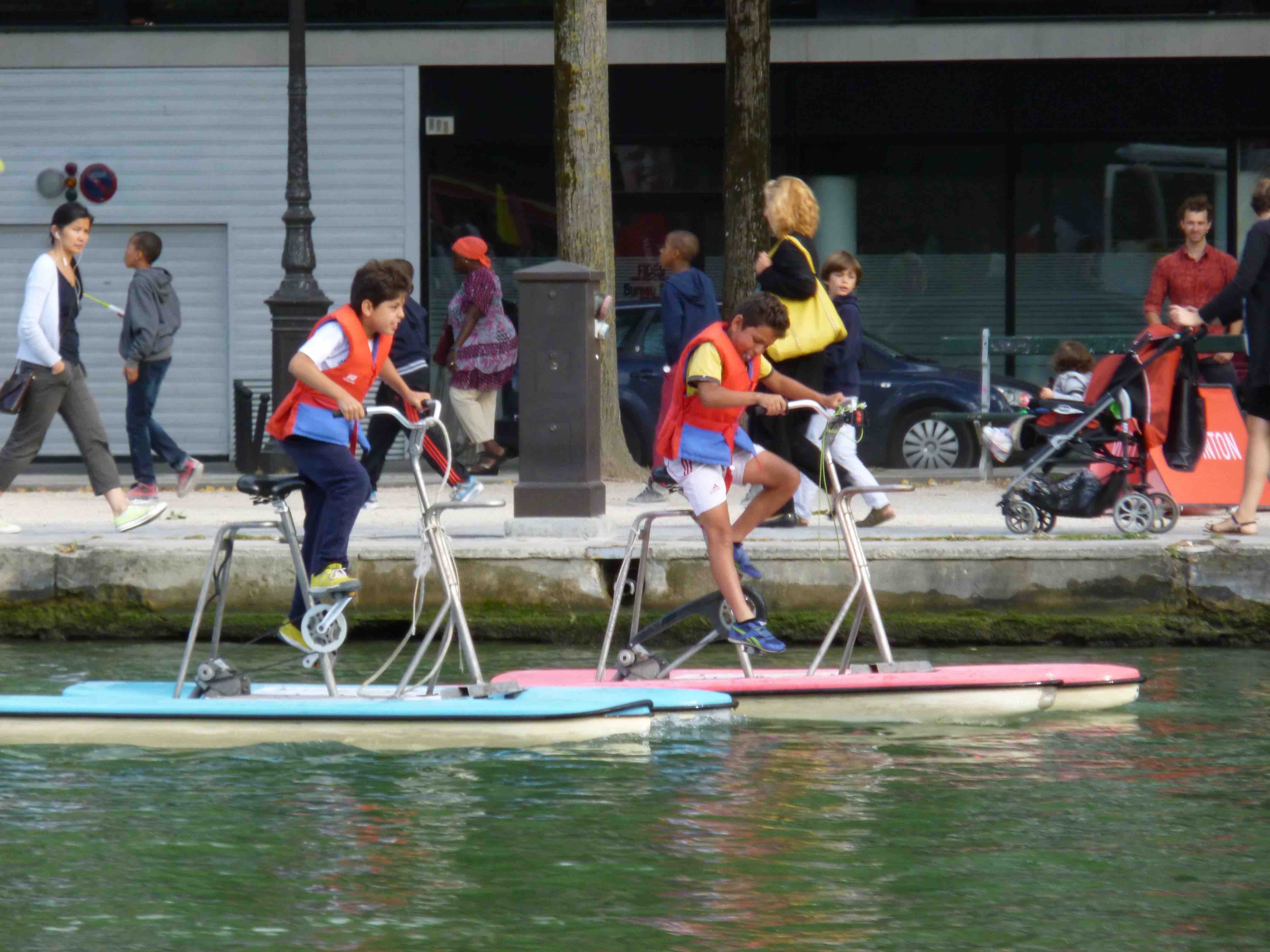 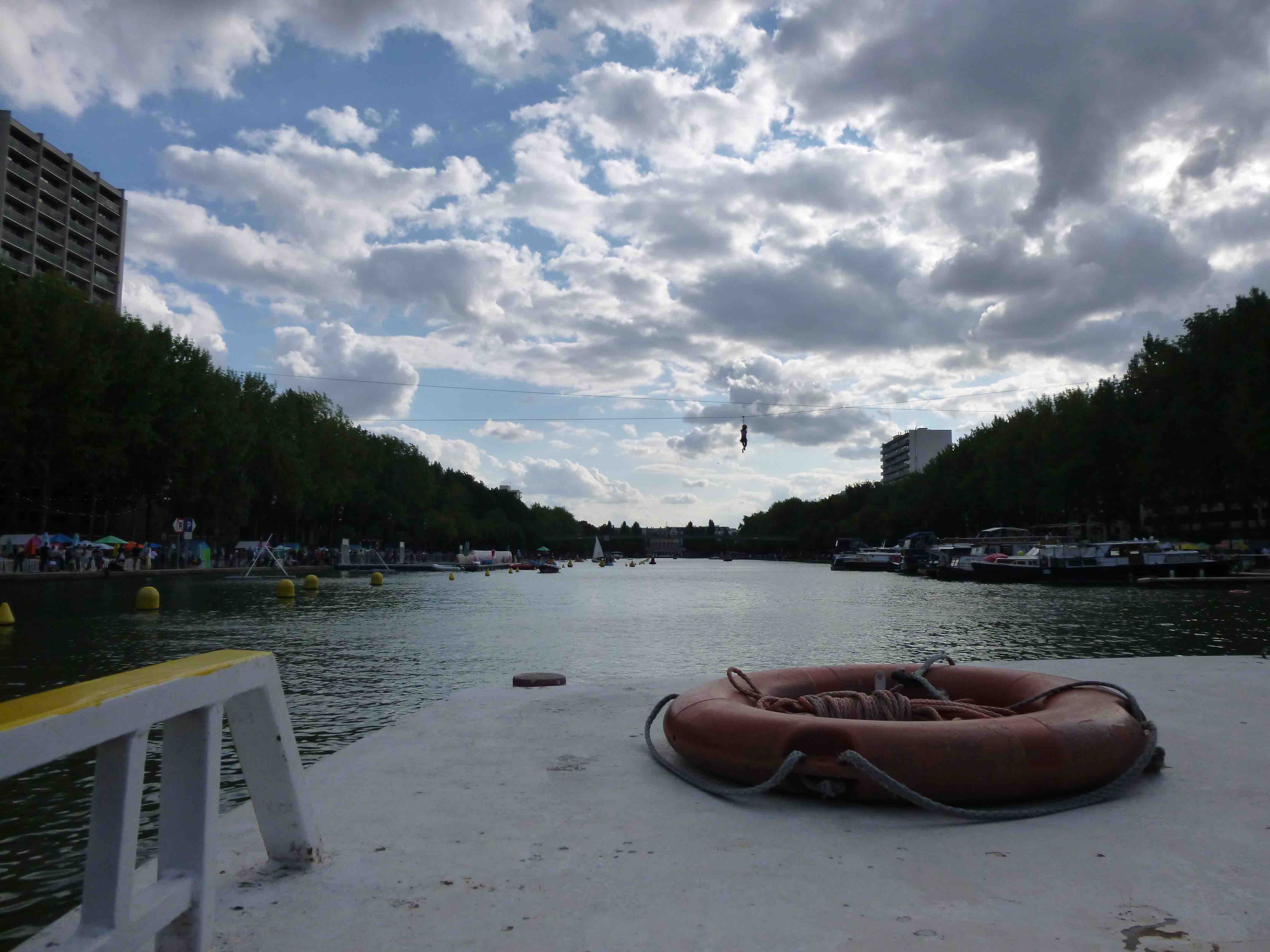 Zip wiring from one side of the Bassin to the other!

Now we pass by Rontonde de la Vilette built in 1789, which was once the Ancien pavilion where merchants needed to pay taxes to enter the ancient city of Paris – now it’s a restaurant. 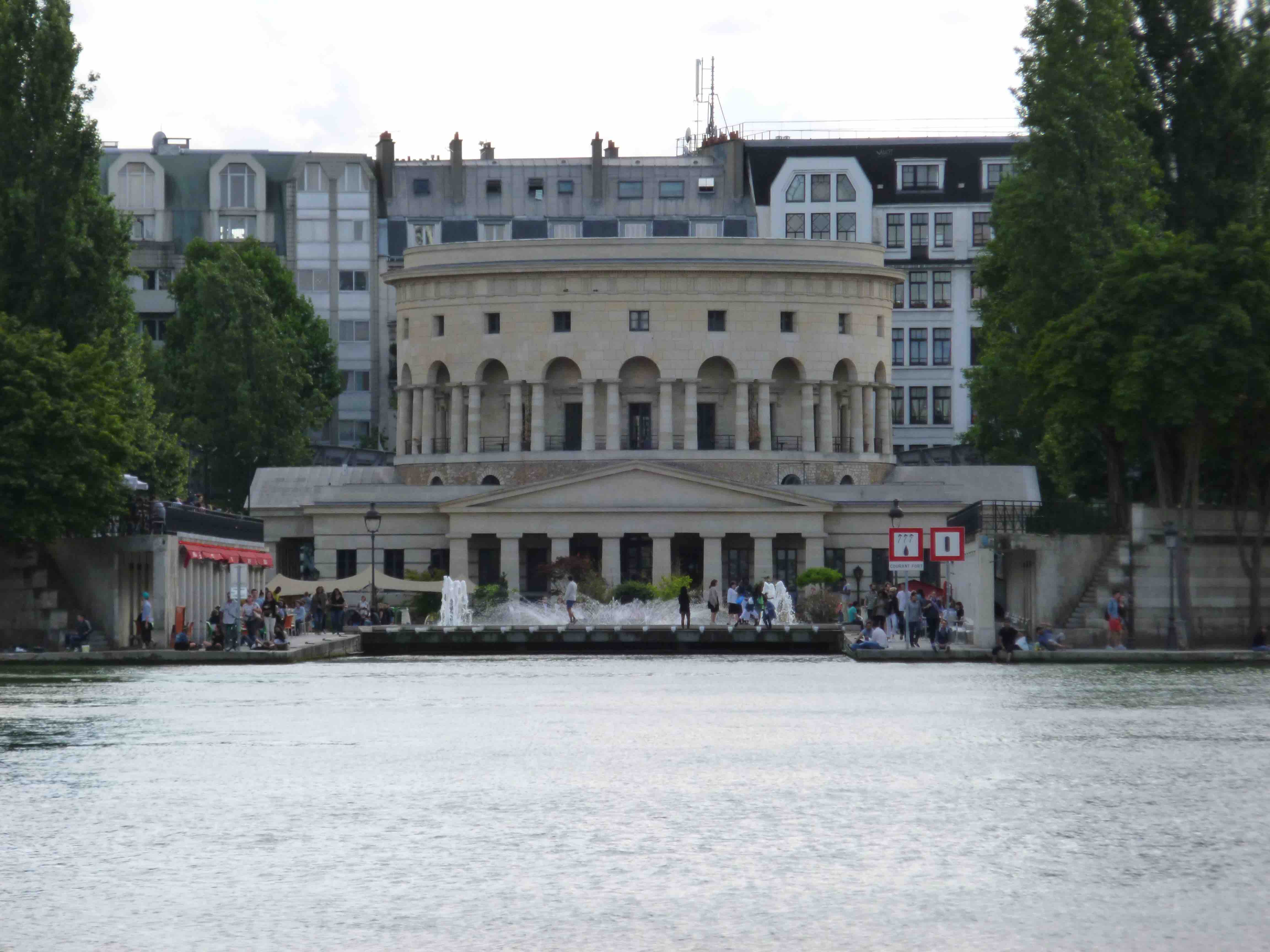 We then begin our journey towards Bastille and head through the first of 4 double locks (or ‘ecluses’ in French) descending a total of 24 metres; the first lock is Ecluses Jaurès, where we drop 3 metres. 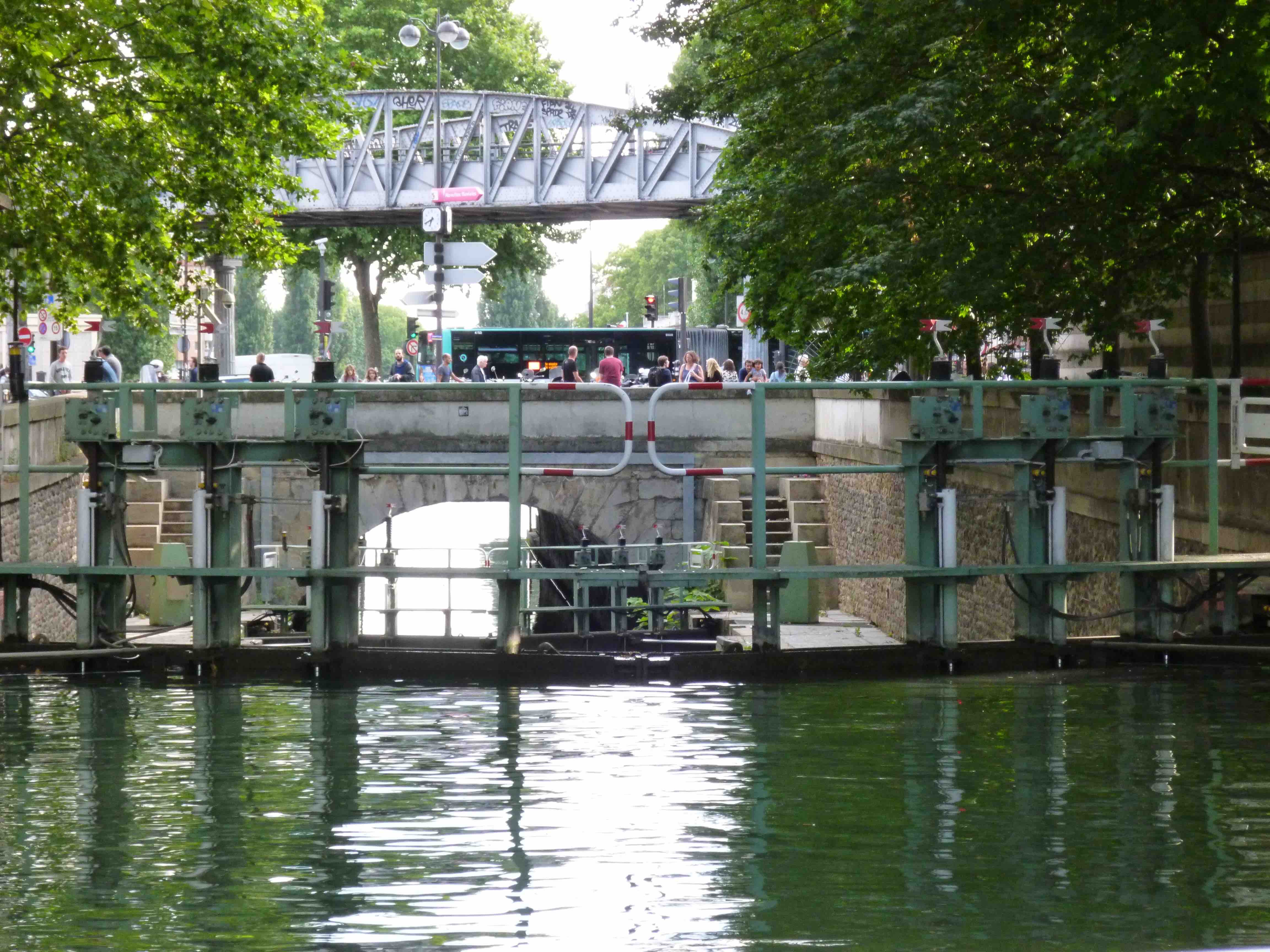 Ecluse Jaurès (that’s the Métro line you can see at the top of the photo!)

We then head through the Voûte Lafayette, which is a type of tunnel.  We very nearly got stuck in here as the roof of the boat only just cleared the height of the tunnel – the guide explained that the water levels were currently quite high which I didn’t understand as we hadn’t really had any rain to speak off. 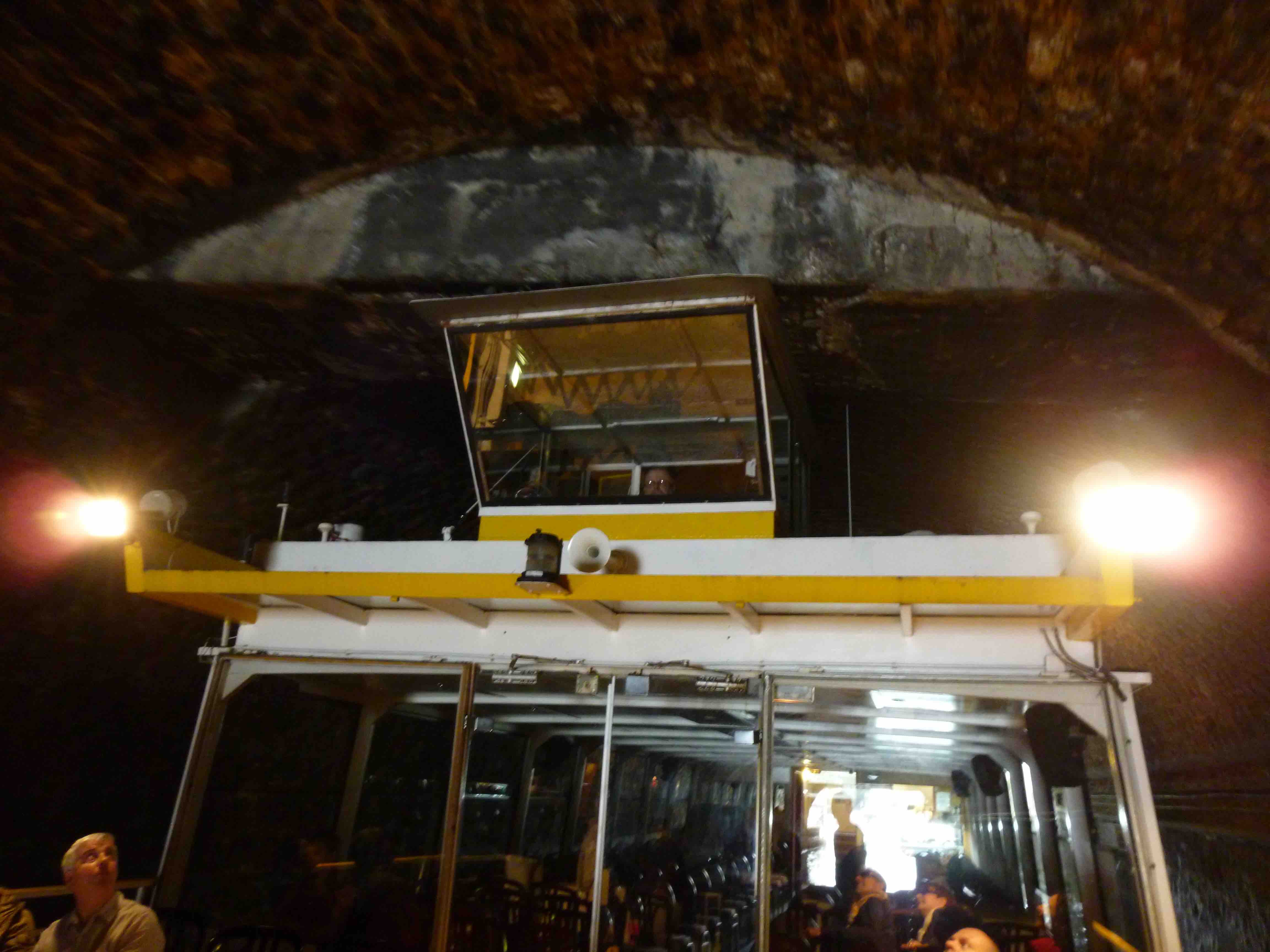 Boat only just got through!

Next was Ecluses des Morts, or locks of the dead, so called because a mérovingien cemetery was discovered here and also, it housed a set of gallows that was used to execute people by hanging – nice.  Then we passed through a couple of swing bridges, one of which I always seem to get stuck at when I’m on my Vélib, interesting to see this from the other side. 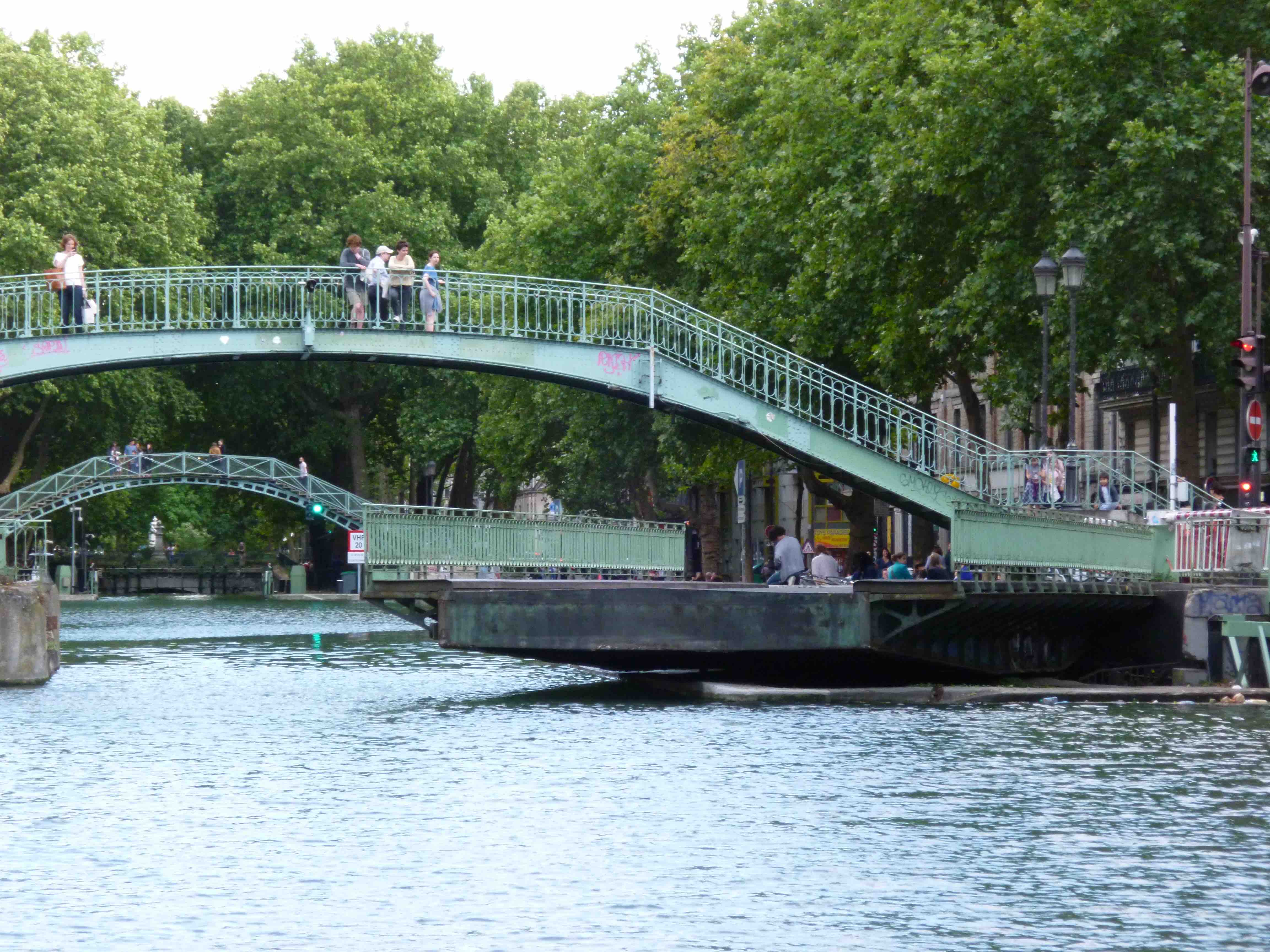 Just two more locks, the Ecluses des Recollets and Ecluses du Temple, the latter which you may recognise from a scene at the beginning of the film ‘Amelie’. 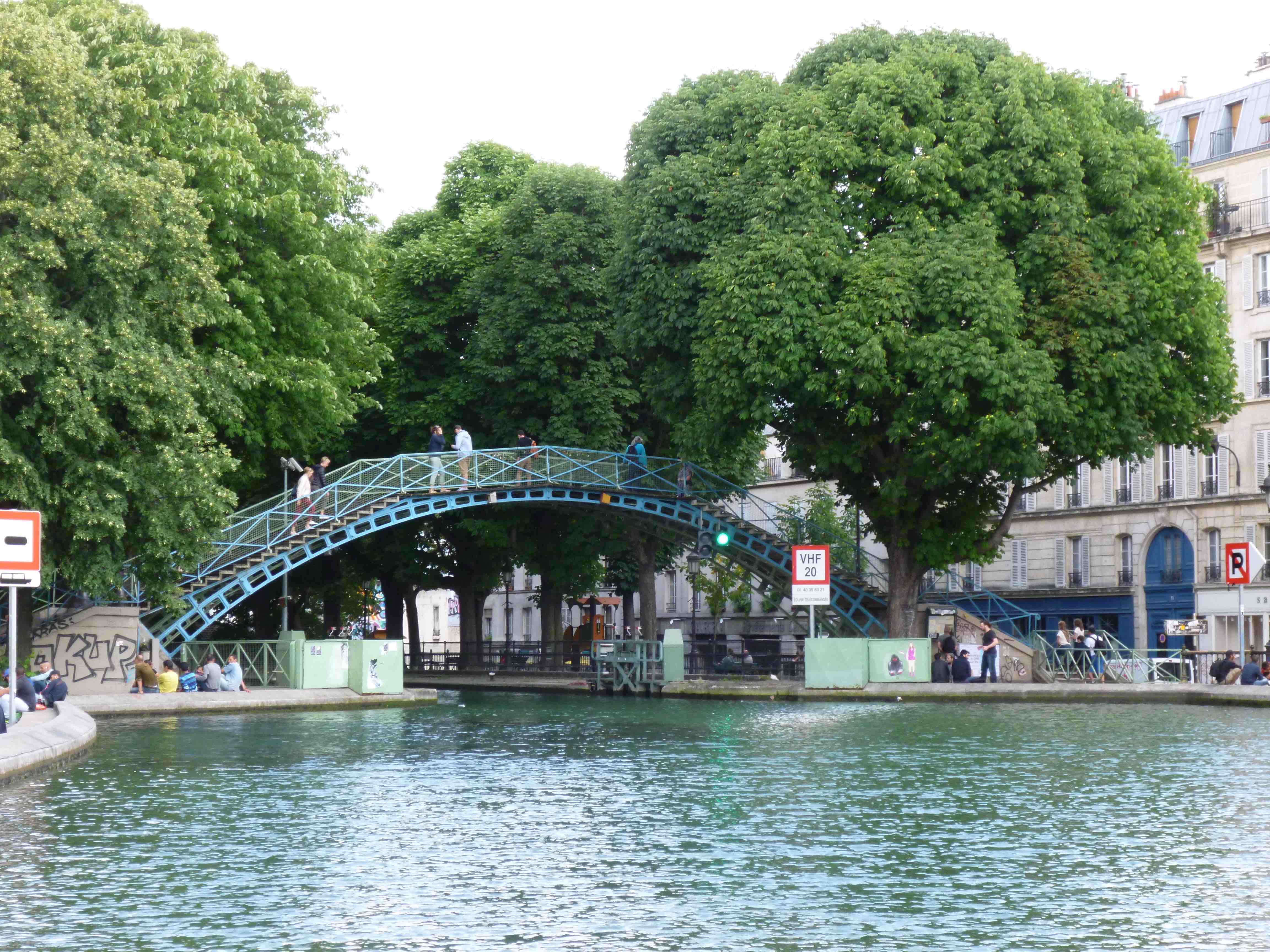 The last leg of our journey leads us into the Richard Lenoir tunnel.  This is 2km long and follows the routes of the Boulevards Jules Ferry and Richard Lenoir. 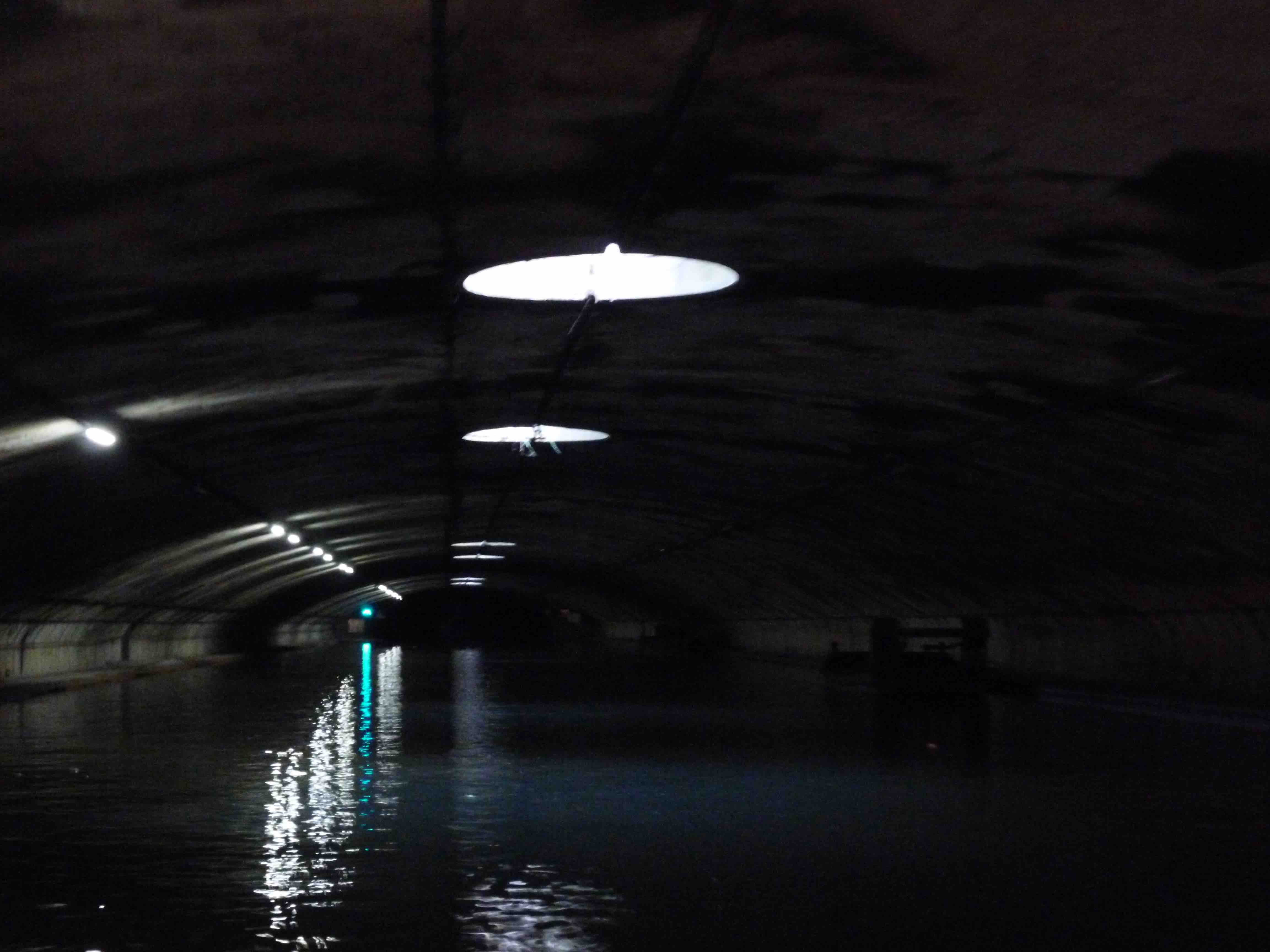 Inside the Richard Lenoir Tunnel

It then passes directly under la Place de la Bastille where, if you look up, you get a view of the Crypt of Bastille. 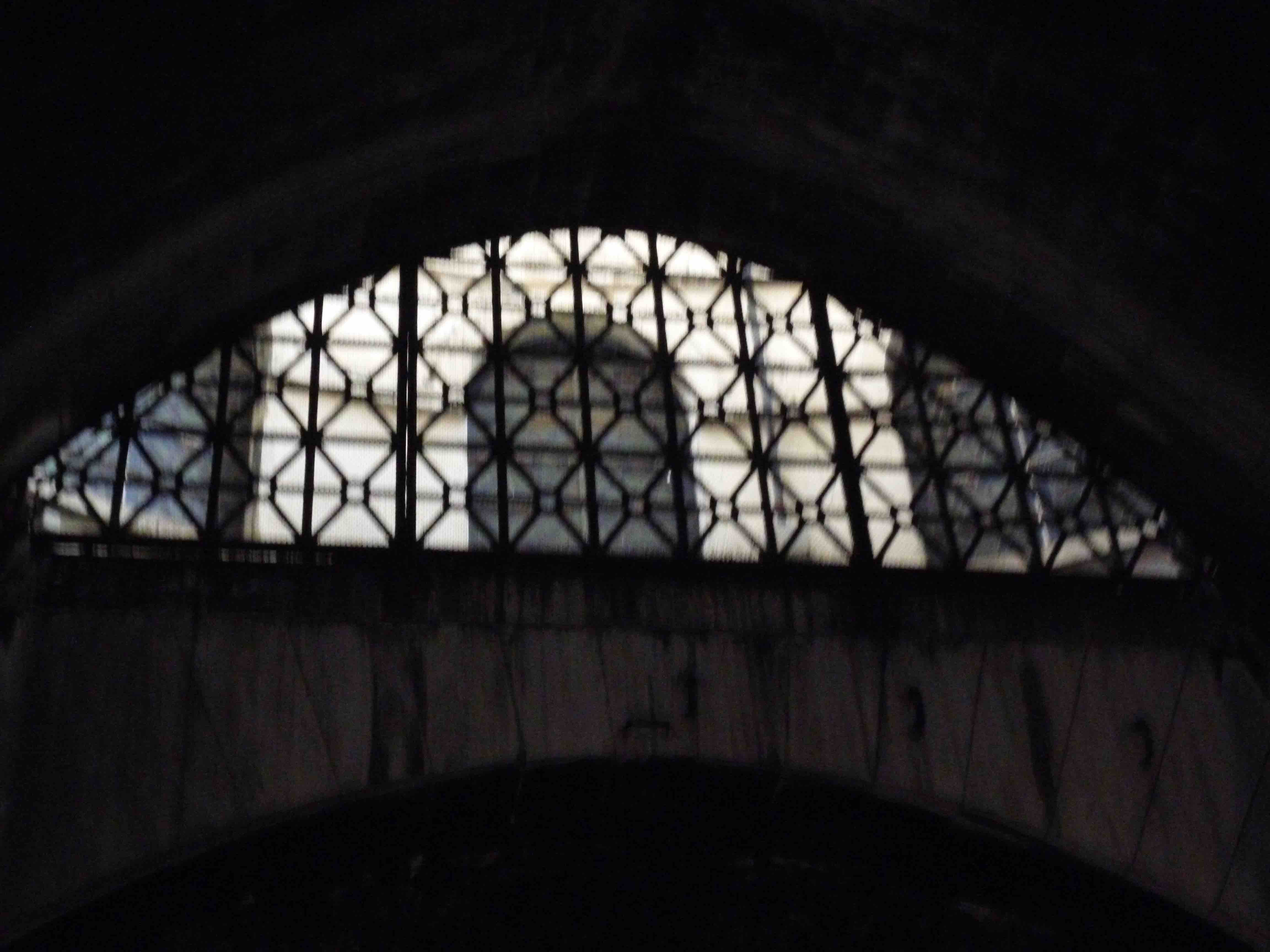 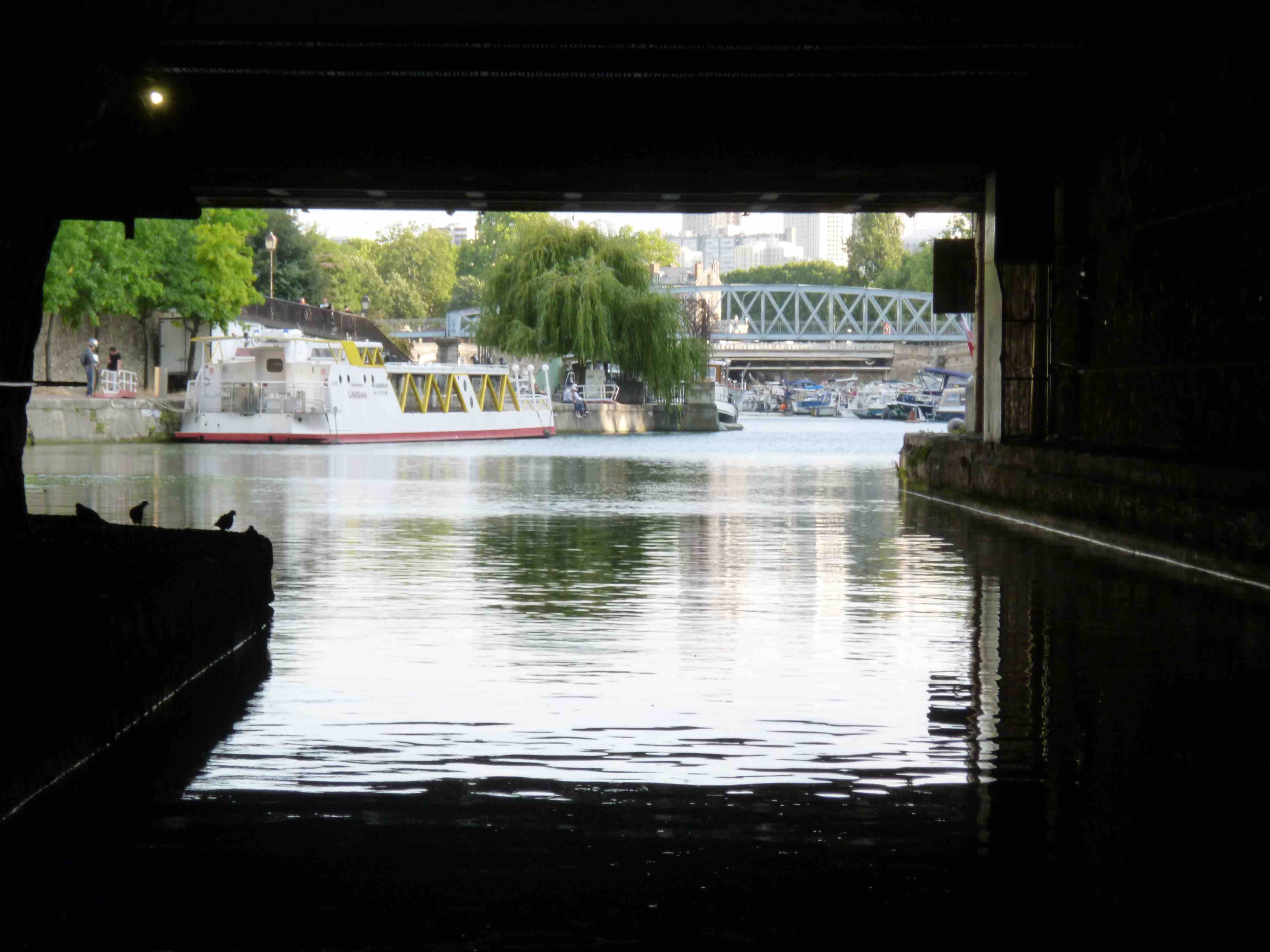 The light at the end of the tunnel

We then arrive in Arsenal Marina just by place de la Bastille and head off to Le Marais for dinner. 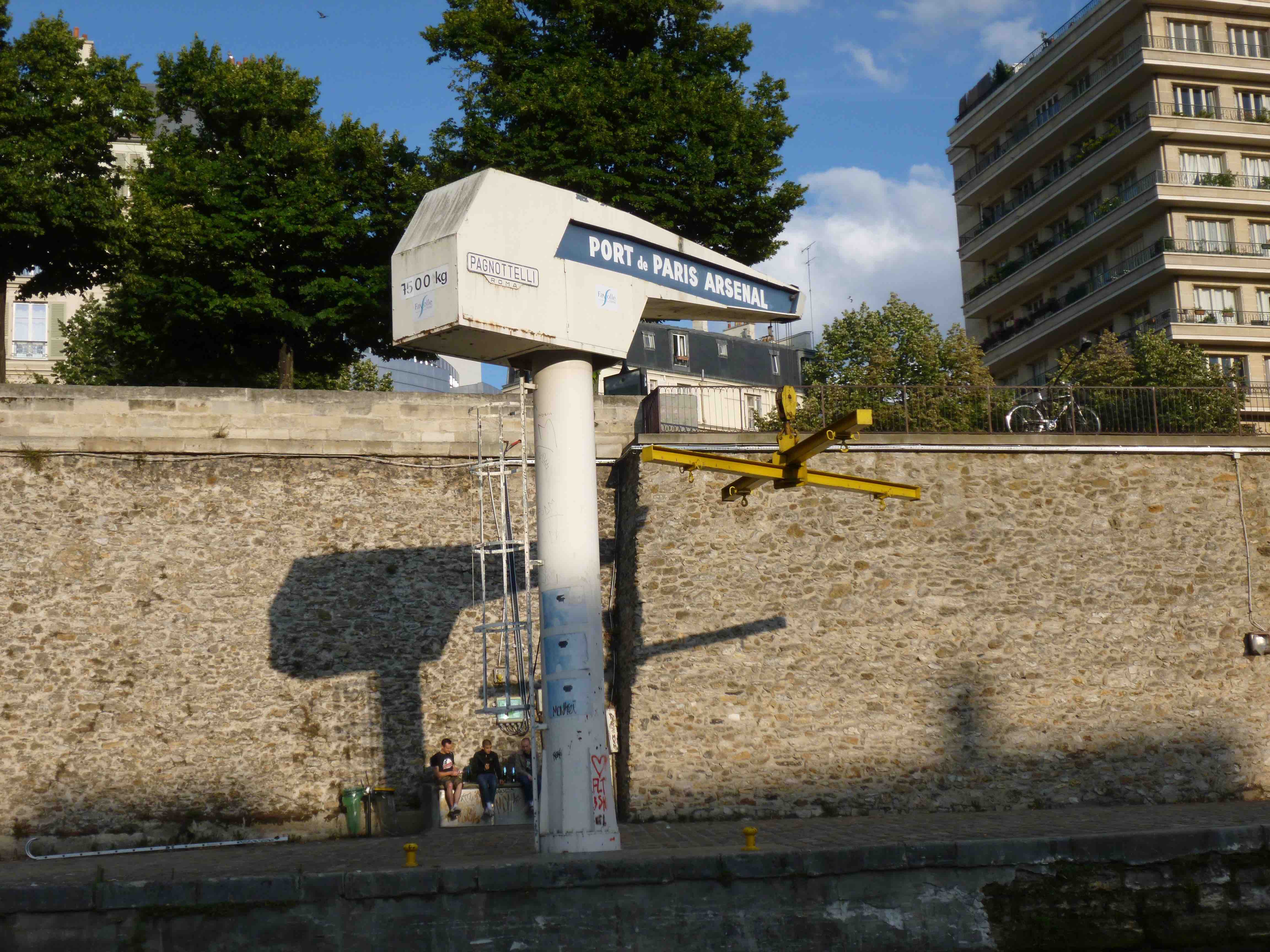 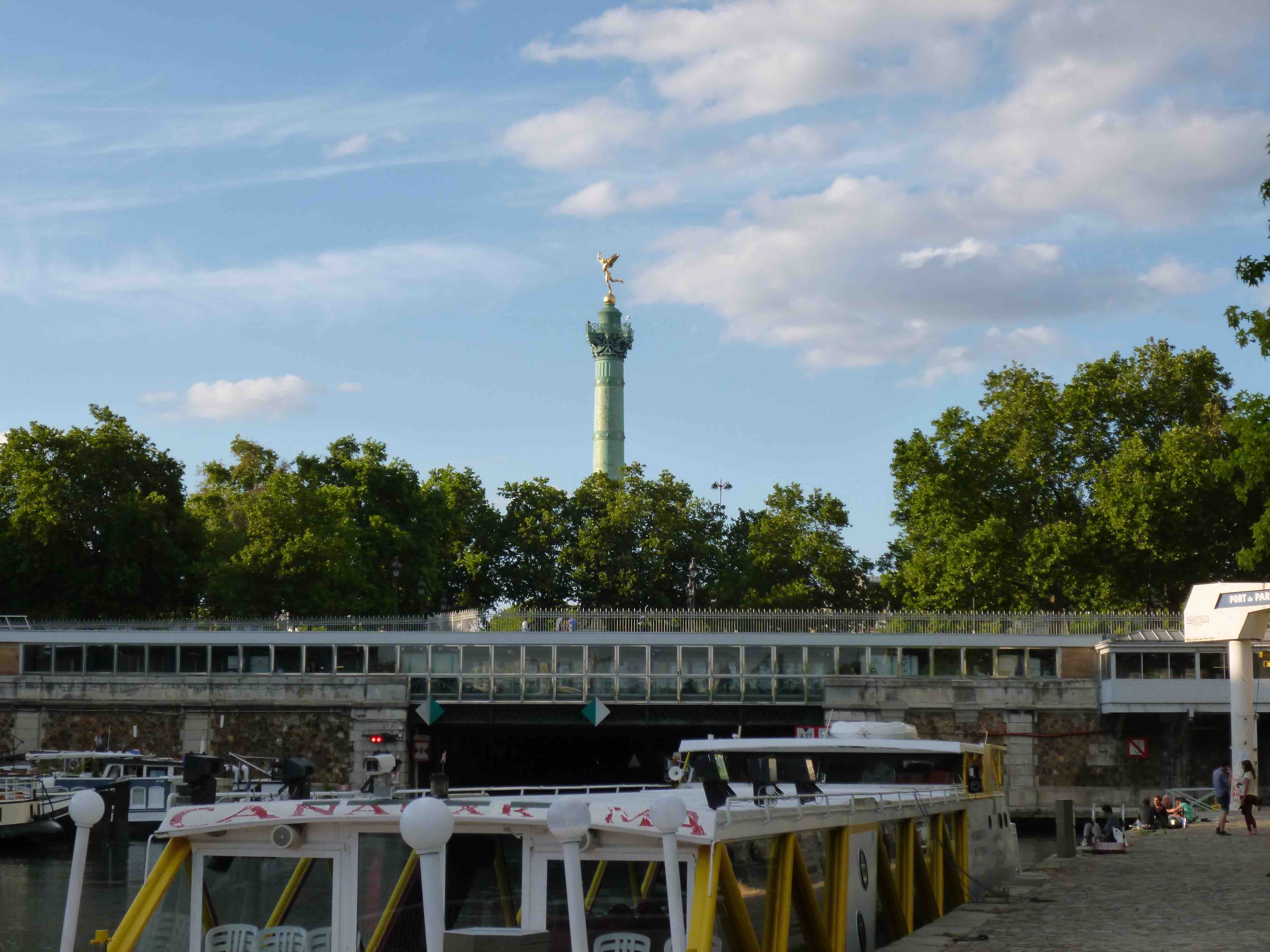 Beautiful view of Bastille as we disembark

What a relaxing way to spend a Saturday afternoon, I can highly recommend it.

Born in Manchester more years ago than I care to remember and now living not far from that there London. By day I work in HR, by night I am Masterchef. From mid-June, I will be travelling to Paris where I will spend 6 weeks' learning all the basics of French pâtisserie, I'm preparing to take on some pounds!
View all posts by jane →
2 Comments
POSTED IN: Canal, Hubby, Paris, Tourist

2 Responses to A Lazy Saturday on the Canal