The only flower I received for Valentine’s Day was a cauliflower!

In an attempt to eat less meat, hubby and I planned yet another vegetarian menu for the week inspired by Hugh Fearnley-Whittingstall’s “River Cottage Veg Everyday”.  This is the book that Hugh wrote when he decided to give up all meat and fish for an entire summer. A fact that is reflected in the number of lighter recipes in the book, there are still a couple of dishes that will warm you up in this kind of weather.

Sunday’s dish was to be Cauliflower and Chick Pea curry.  The thought of boiling the cauliflower, as Hugh suggests, was just too reminiscent of my childhood so I decided to go with a more ‘on-trend’ option of roasting it – the results were surprisingly good.

It couldn’t be simpler, spray on some oil, sprinkle a bit of salt and pop it in the oven until it browns nicely. 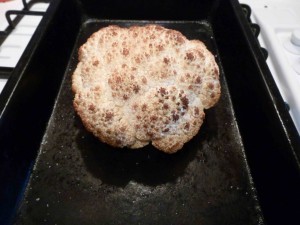 There is a slight whiff of brassica that fills the air, but nowhere near as much as when you boil it.  It’s also a great snack, I couldn’t resist a little nibble while it was cooling off and could very easily have eaten the whole thing – weird, right?! 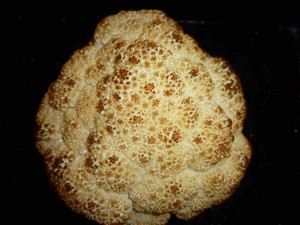 A more ‘arty’ shot, I was playing with my cameral settings . . .

It was at this point that Hubby took over as I had work to do, but a few spices, an onion and some chick peas and in 20 minutes, a delicious curry to warm us up on this cold winter’s day.  Happy Valentine’s Day! 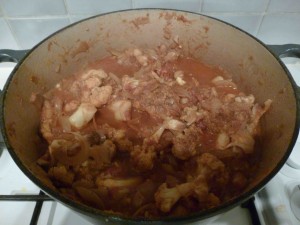 Photo doesn’t really do it justice